FastHenry2 is a software for computing the frequency-dependant self and mutual inductances and resistances of a generic tridimensional conductive structure, in the magnetoquasistatic approximation. It can also generate Spice-compatible, multiple-frequency equivalent-circuit models.
A de-facto golden reference standard, FastHenry2 is derived from FastHenry, originally developed by Mattan Kamon at M.I.T. on Unix platform for the solution of Maxwell equations and extraction of inductances and resistances.
Binary and source code versions, including the original M.I.T. code, are available from our download section. The original FastHenry source code distribution is also available directly from M.I.T. at the link in our links page. 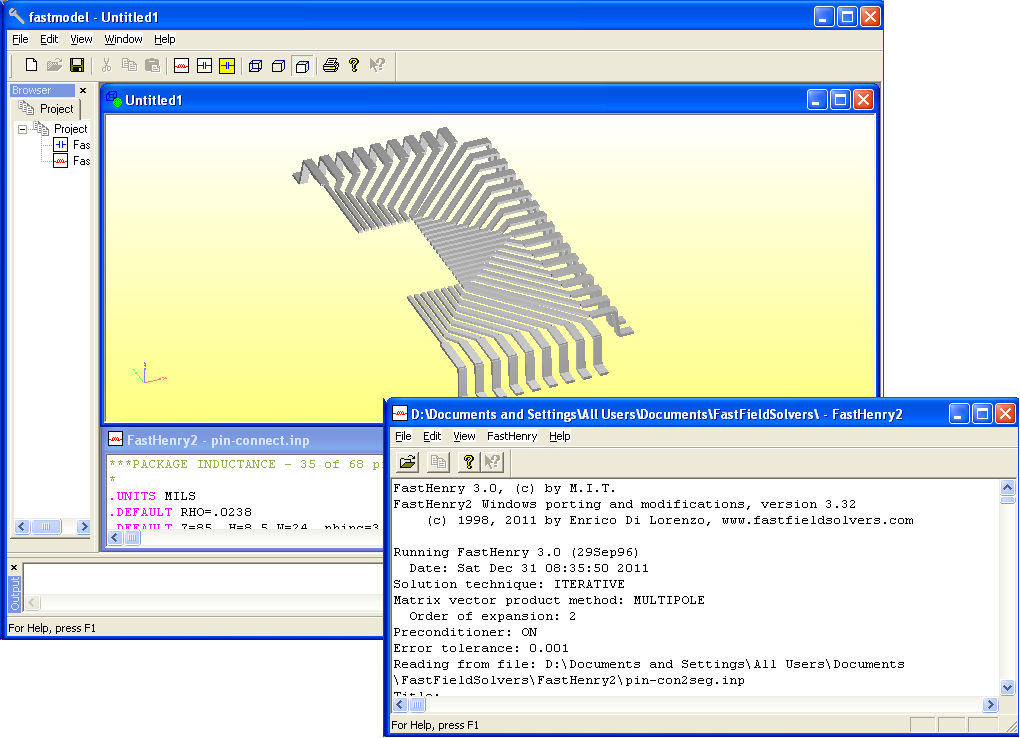 FastHenry2 computes the frequency-dependant self and mutual inductances and resistances of a generic tridimensional conductive structure, in the magnetoquasistatic approximation.
The input data, describing the geometry and the frequencies of interest, is provided in a file. This file specifies every conductor as a sequence of rectilinear segments connected between nodes. Every segment has a finite conductivity and the shape of a parallelepiped, whose height and width can be assigned. A node is a point in the 3D space. The section of a segment can be divided, if required, into an arbitrary number of parallel filaments (that is, parallelepipeds with smaller cross section than the original one), the whole of which constitutes the segment itself; it is then assumed that every filament carries a uniform current.
In this way is possible to model the high-frequency effects on the segments. In fact, when the frequency increases, the current is no longer uniformly distributed along the cross section of a conductor. Hovever, in limited regions of the section, the current can be reasonably approximated as uniform. Therefore, being able to specify an arbitrary discretization of the volume of the conductors, the accuracy of the results is affected accordingly and in general is better as the discretization is refined.
The results are provided in form of a Maxwell impedance matrix Z=R+jL, where the bold letters represent matrices. Then, the results can be converted in equivalent, SPICE-like, lumped elements circuit models with an utility provided with FastHenry2, called 'MakeLCircuit'. The network thus obtained, however, is valid only for a single frequency. Alternatively, is possible to generate directly from FastHenry2 a SPICE-like circuit capable to model frequency-dependant inductances and resistances. This latter opportunity is very powerful because allows to see how signals in the time domain are impacted by the different response of the conductors at the various frequencies.
The classic approach, from which FastHenry2 differs, consists in calculating the frequency response of the structure in the frequency domain, and using a Fast Fourier Transform or a Laplace transform to obtain a behavioral description of the circuit in the time domain. Next, a convolution (or similar technique) is applied to get the temporal response of the circuit. The conversion from the frequency domain to the time domain is necessary, as the characterization of the lines in the frequency domain is in term of irrational functions of the frequency variable. Therefore, a generic SPICE-like simulator, being based on the numerical integration of ordinary differential equations, deriving from a lumped elements circuit whose parameters are characterized by rational functions in the frequency domain, in not capable to handle elements characterized by irrational functions. The advantage of FastHenry2 is that it is able to find rational approximations of these functions, at least in a fixed range of frequencies, and so it allows to operate directly in the time domain. Following this approach, FastHenry2 is capable to generate a Spice-friendly Reduced Order Model (ROM) of the system, which is valid, according to the selected expansion order, up to a defined maximum frequency.